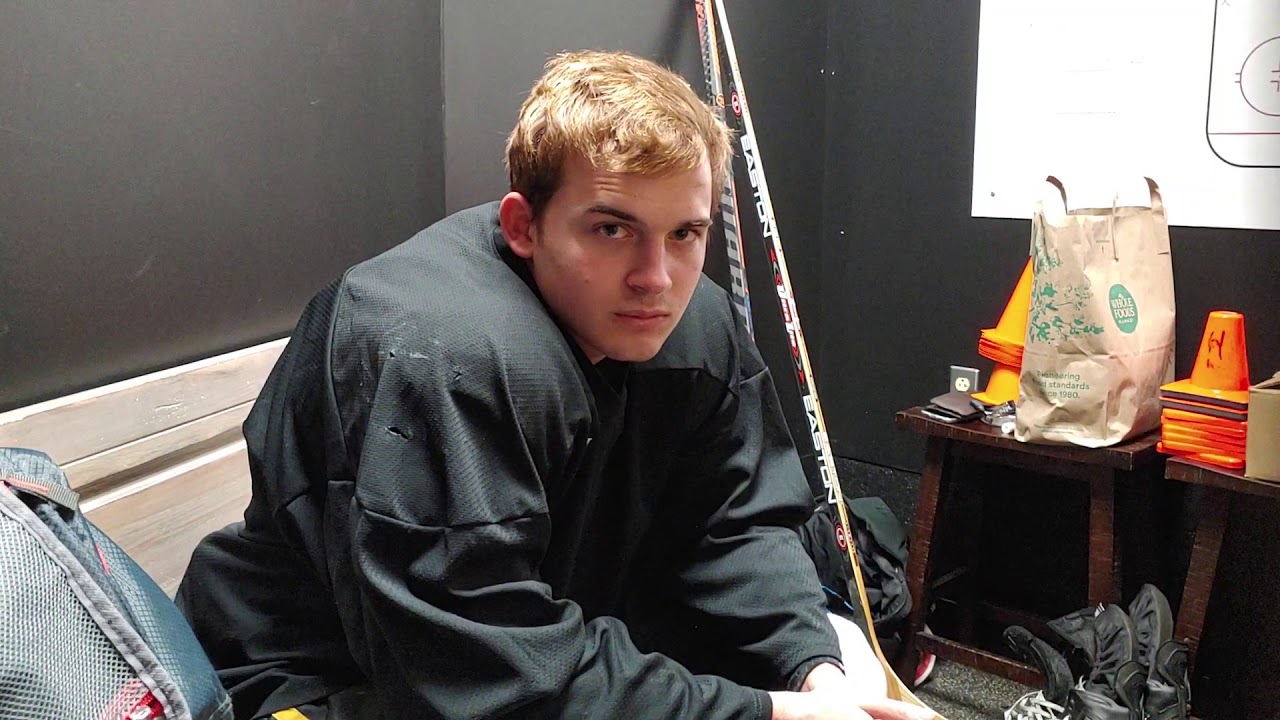 The whiteboard in Upper Arlington hockey coach Hamish Baird’s office at OhioHealth Ice Haus lists every Golden Bears player by position, and some by line.

Eleven forwards and centers are listed among the top four lines, although beyond the first line they have been interchangeable.

What most impresses Baird is their production and, by extension, their increased playing time.

Not only had 14 players scored at least one goal through 16 games, but Baird used four lines more frequently than expected as UA was 9-8-0-2 overall and 6-2-0-1 in the CHC-Red Division before playing St. Charles on Jan. 22 and ranked eighth in last week’s state poll.

“They have their unique skill sets, their strengths and weaknesses. When they recognize their strengths and capitalize on them, they can really contribute,” Baird said. “We had to change from a skill team last year to an even harder-working team to maintain that level of success (when UA went 36-1-1).

“Our forward lines haven’t been as productive as they have in the past, but we’re very good forecheckers. We have a good group of young guys who can step right in more quickly than I expected.”

The first line of Carson Gresock, Adam Karap and Max Robins combined for 23 goals through 19 games, with Robins scoring a team-leading 13.

Joey Holland, Charlie Linzell and Jack Norris generally are on the second line, but they have played with any combination of Nolan Adams, Aden Johnson, Jack Nolan, Colton Paider and Tanner Stone.

Linzell, a sophomore, was the only freshman on varsity last year.

“Everybody is skilled enough to be out there whenever in whatever situation,” Karap said. “If one line gets tired, you can send out another and always know there’s a line ready to go out there and play. Even our fourth line is scoring goals. We can’t ask for much more than that.”

“We needed a lot of guys to take on expanded roles,” Robins said. “My linemates have fed me the puck and gotten me open. I’m glad I’ve been able to finish their passes. I’ve grown more confident as I’ve gotten older, more confident with the puck and taking shots.”

Junior defenseman Sam Cannon said the team’s depth is evidence that UA has continued to build a strong program rather than occasionally being able to field competitive teams.

“Last year, we brought everything to the table – talent, size and speed. We were gritty. This year, it’s been about trying to find everybody’s individual roles,” Cannon said. “Our program, we have good coaches and good players and we keep cycling through. We keep building from one year to the next.”

Jacob Shanklin of the wrestling team recently earned his 100th career victory, and teammate Jake Thomas finds himself closing in on that mark as UA enters the final few weeks of the regular season.

Shanklin, a senior who competes at 152 pounds, picked up the milestone win Dec. 30 during a quad at Marysville that also included Hilliard Davidson and Pickerington Central. He was 19-0 this season and 111-40 in his career before a Jan. 21 OCC-Central match against Olentangy Orange, ninth all-time in program history.

The Bears were 1-1 in the OCC-Central and 14-5 overall before facing Orange. They opened league competition Jan. 7 with a 67-3 win at Hilliard Bradley and lost 37-30 to visiting Olentangy Liberty seven days later.

The boys basketball team took records of 4-4 overall and 1-3 in the OCC-Central into a Jan. 22 game against Bradley, but one highlight of an up-and-down season came seven nights earlier with a perfect performance at the foul line.

UA made all 20 free-throw attempts Jan. 15 in a 64-55 win at Groveport, 11 of which came from Nick Heath. Heath finished with 19 points and Quinn Corna had 26 in a game that had been scheduled less than 48 hours earlier because both teams lost league opponents due to COVID-19 quarantines.

Corna and Heath each scored just three points in a 58-29 loss at Bradley on Jan. 19, a game that had been postponed from exactly one month earlier because of a quarantine.

The Bears alternated wins and losses in their first eight games.